While some people prefer to buy a new house, others appreciate the charm of an older home. After all, an older house has a distinct personality and character. Depending on its age, it might also have some unique features.

As an example, some older homes boast original stained glass windows, beautiful hardwood floors, and even real brick walls. There’s even a difference in construction, often making them sounder and safer.

However, as an older property, it’s essential that you gather information from the seller and have an inspection done before finalizing a purchase. Unless completely renovated, an older house might have some potential expensive pitfalls. 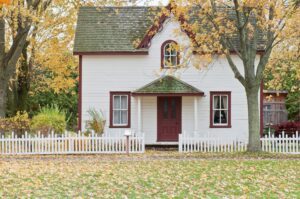 Not only does the plumbing system include pipes on the inside of the home but also on the outside. A few possible problems include:

A second potential pitfall of buying an older house has to do with the electrical system. Again, unless updated at some point, there’s a chance it’s either inadequate or unsafe. For this, you want to have enough outlets to accommodate your daily needs. At the same time, it’s crucial to have safe wiring.

Generally, wiring installed in newly constructed homes lasts 100 years. In comparison, wiring installed in homes built before 1960 has an average life span of 70 years. Now, the length of time electrical wiring lasts depends on the quality and condition of the insulation.

Once the insulation starts to deteriorate, various problems can arise, including electrical shock, power failure, and fire. A home inspector can check the entire electrical system of an older house to make sure the wiring is in good condition. That consists of looking at the insulation, along with any damage caused by rodents, fire, or water.

Then, there’s the breaker box, which can also create problems such as electrical failure, shock, and fire. First, you need the correct number of breakers to coordinate with the system itself. Second, if the box is more than 40 years old, you’ll probably need to replace it.

The third potential pitfall is the HVAC system, which includes the air conditioning unit and furnace. Often, an older house has old equipment. This too is something an inspector should check. Although the exact lifespan varies based on the brand, most systems won’t last beyond 15 to 20 years.

As an HVAC system nears its end of life, several things can happen. One is a complete system failure where either the air conditioning or furnace, or both, no longer works. Sometimes, a licensed technician can fix a problem, but it won’t last as long as having new equipment installed.

HVAC systems always seem to stop working at the worst possible time. In the summer, you lose cold air or in the winter, the furnace stops producing hot air. However, the greater concern is a gas leak. Carbon monoxide, which is a colorless and somewhat odorless gas can cause serious health problems and even death.

Updating an HVAC system is beneficial to you, as well as any future buyer if you plan to sell within 10 years or so. Another advantage…new systems are energy-efficient. That means you’ll have a comfortable home and spend less on utility bills.

An Important Piece of Advice

Even if you purchase an older home where the plumbing, electrical system, and HVAC equipment are in excellent condition, it never hurts to look into a home warranty. That way, if something breaks or fails, you’d only pay a deductible rather than the high price of replacement.